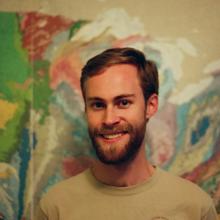 What did the Cold War look like from Indian Country? This paper foregrounds the narrative of postwar American Indian activism during antinuclear protests at the Nevada Test Site between 1985 and 1992. It argues that Western Shoshone spiritual leader Corbin Harney seized the anti-state sentiment of the moment to direct Anglo-American activism to the cause of anticolonial resistance. Using the framework of “nuclear colonialism,” in tandem with anthropologist Joseph Masco’s recent claim that we live in the “Age of Fallout,” it tells a story that traces the legal history of the Western Shoshones’ sacred land claims from the 1863 Treaty of Ruby Valley to the first Indigenous Peoples’ Day of 1992 and the supposed end of the nuclear weapons testing in Nevada.

Taylor is a second-year doctoral student in the Department of History. He studies the history of the United States in the nineteenth and twentieth centuries with a particular focus on culture, politics, and the environment. In the past, his research centered on the development of road and highway infrastructure on public lands in the Pacific Northwest. More recently, he has looked at noise pollution activism in 1960s New York City and nuclear weapons testing and radioactive fallout in Nevada, Utah, and Arizona.