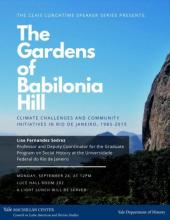 A case study on urban environmental history. Babilonia hill is a traditional
favela of Rio de Janeiro (where Black Orpheus was filmed). Since 1985,
after some very bad landslides caused deaths in the community, they begin
a project of reforestation with the support of the city administration and a
local shopping center. The project has been a success senses, but it has
been constantly challenged by gentrification, and, paradoxically, gang
violence.
Lise Sedrez is an environmental historian at the Universidade Federal do
Rio de Janeiro, where is currently the Deputy coordinator of the Graduate
Program on Social History. Ph.D. in Latin American History from Stanford
University (2005).
She has worked and published in the United States and Brazil, is the co-
editor of the series Latin American Landscapes, by the University of
Arizona Press. Member of the Executive Board of Sociedade Latino-
Americana y Caribeña de Historia Ambiental), Lise’s research interests
include urban environmental history, history of disasters and digital history.
She has recently published on the history of environmentalism, Guanabara
Bay, and floods in Rio de Janeiro e Buenos Aires. Fellow at the Rachel
Carson Center for Environment and Society in Munich, Germany, in 2015-
2016.