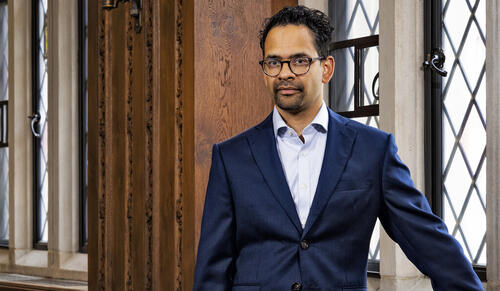 Yale historian Sunil Amrith has been awarded the 2022 Dr. A.H. Heineken Prize for History in recognition of his examination of the historical origins of inequality within and between countries and the impact of climate change on global socioeconomic conditions.

The Heineken Prizes, given every two years to five distinguished researchers working on a global scale and to one Dutch artist, are the Netherlands’ most prestigious international arts and sciences prizes. The Royal Netherlands Academy of Arts and Sciences nominates candidates and is responsible for the selection of the winners. During the first week in June a laureate is announced each weekday.

Amrith, who is the Renu and Anand Dhawan Professor of History in Yale’s Faculty of Arts and Sciences, studies the history of South and Southeast Asia. He is interested in the transnational connections between these two regions, with a focus mainly on the 19th and 20th centuries. Among other topics, he has studied the large-scale migration around the Bay of Bengal and the circulation of cultural, religious, and political ideas that followed. He is also interested in the ecological processes that have connected South and Southeast Asia.

His most recent book, “Unruly Waters,” a history of the struggle to understand and control the monsoon in modern South Asia, makes a connection between colonial exploitation and climate change.

Read the rest of the article