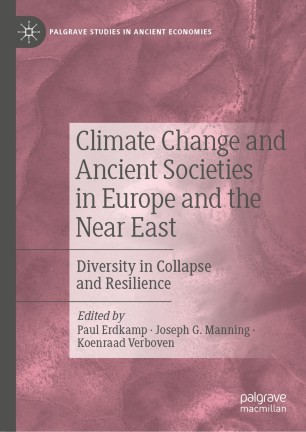 Climate change over the past thousands of years is undeniable, but debate has arisen about its impact on past human societies.  This book explores the link between climate and society in ancient worlds, focusing on the ancient economies of western Eurasia and northern Africa from the fourth millennium BCE up to the end of the first millennium CE.

This book contributes to the multi-disciplinary debate between scholars working on climate and society from various backgrounds. The chronological boundaries of the book are set by the emergence of complex societies in the Neolithic on the one end and the rise of early-modern states in global political and economic exchange on the other. In order to stimulate comparison across the boundaries of modern periodization, this book ends with demography and climate change in early-modern and modern Italy, a society whose empirical data allows the kind of statistical analysis that is impossible for ancient societies.

The book highlights the role of human agency, and the complex interactions between the natural environment and the socio-cultural, political, demographic, and economic infrastructure of any given society.  It is intended for a wide audience of scholars and students in ancient economic history, specifically Rome and Late Antiquity.

Paul Erdkamp is Professor in Ancient History at Vrije Universiteit Brussels, Belgium.  He teaches Ancient History, specializing in the Roman World, with a particular interest in economy, food supply, historiography, and environmental and social aspects of army and war.

Joseph G. Manning is Professor of Classics and Professor of History and Senior Research Scholar in Law at Yale University, New Haven, USA.  He specializes in Hellenistic history with particular focus on the legal and economic history of Ptolemaic Egypt.

Koenraad Verboven is Professor of Ancient History at the University of Ghent, Belgium. He specializes in ancient social and economic history, particularly of the Roman world, and has a special interest in monetary history and numismatics, friendship and patronage based networks, guilds (collegia), (neo-)institutional analysis and complexity economics.